This article describes how to troubleshoot power issues on the Mesa 3.

The charge indicator of a battery (removable or internal) needs to be initially calibrated. For details, see the One or both batteries are stuck at 7 percent charge web page.

Verify that the flexible card retainer is fully seated and is not preventing the main removable battery from fully seating, as shown in the following images: 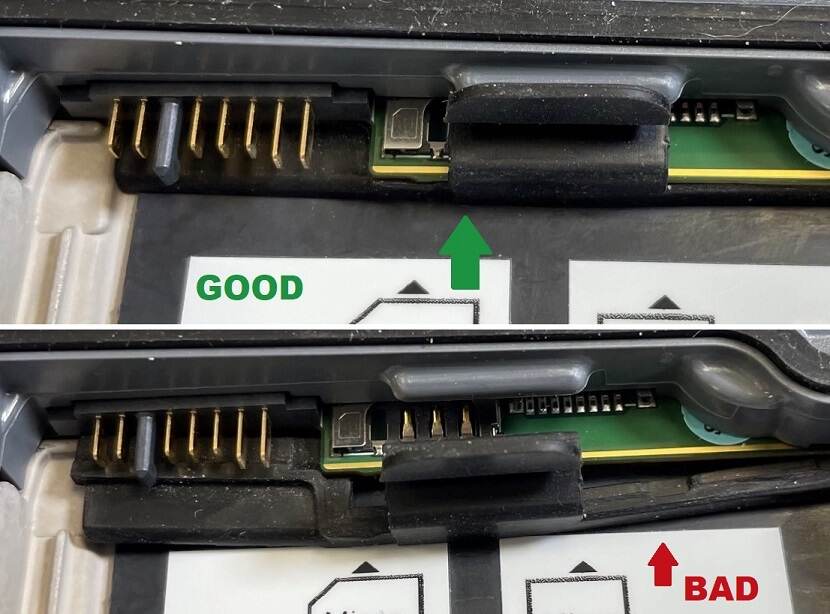 Mesa 3 Android Not Powering On

If a Mesa 3 Android unit will not turn on, try plugging in a 30W wall charger and a powered USB-C cable simultaneously. If this works, make sure updates are installed. Further details are at the Mesa 3 Android stuck during boot web page.

The Mesa 3 requires a 30W or higher power supply with a 12V output to power the tablet and charge the batteries at the same time. An older charger--such as from a Mesa 2--will not work properly with a Mesa 3. For details, see the following web page:

You can also try testing with a spare charger or from another unit.

A Mesa 3 unit may not immediately turn on if the battery pack(s) have been electronically disconnected, such as after holding the hardware Power button for over 17 seconds (often referred to as a "Hard Reset").

To recover a unit that is in the electronically disconnected state, make sure the main removable battery pack is inserted properly in the unit, attach a proper 12V 30W or higher power source, then briefly press the hardware Power button.

A Mesa 3 may not turn on or may appear to not charge if the batteries have been over-discharged to below a critical threshold. This may occur if the unit and battery pack(s) were not stored properly (as instructed in the manual). If a battery is in an over-discharged state, you may need to leave it plugged in overnight. Initially, the system will only slowly trickle charge the severely depleted battery pack(s). The red light may begin to flash slowly, indicating that the battery is charging. When the battery reaches at least 40 percent charge capacity, then the unit may finally again respond normally to pressing the Power keypad button. Juniper Systems recommends allowing the unit to continue to charge until full.

Make sure the door magnet is not missing or weak, as described in Mesa 2 will not recognize or charge batteries.

The charging port may be loose or damaged. Test this by charging the battery using a dock, another Mesa 3 unit, or an external battery charger. If your Mesa 3 needs repair, fill out the Repair Order Form.

The main removable battery may have imbalanced cells or some other condition that prevents it from fully charging, or in some cases from even being detected. Try swapping in a spare battery or borrow from another unit.

If the suggestions above have not helped, then the issue may be related to the following web page.